We decided to take the long way to Grand Teton and finish out the last part of the loop we didn’t do yesterday. We still didn’t see any bears, which Grandmother had hoped to see. We decided that Grand Teton would give us another opportunity. I commented that I’d like to see a bald eagle in Grand Teton for the Fourth, and Tim said not to worry–he’s bald and has eagle eyes, so my wish would come true. 😉 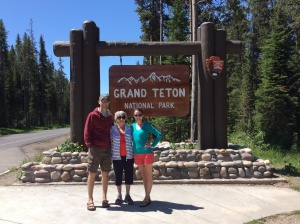 We drove through the park on our way to the hotel (which I discovered is two hours away from the park–oops! No wonder the price was so reasonable!). The scenes were gorgeous through the park!

We ended up in Jackson as hoped, and we spent the afternoon exploring the little town. There are plenty of shops and plenty of Western art. If we had a cabin somewhere, we could have outfitted it completely with all the offerings available in town.

Grandmother remembered a restaurant where she and Sally Lowe had a wonderful dinner when they were in Jackson, so we called and made reservations to eat there. The Blue Lion was a small little place that Tim said reminded him of L’Escargot.

The food was WONDERFUL! Tim and Grandmother shared a rack of lamb that sounded like it just melted on their tongues; I had grilled elk that was out of this world. Grandmother and I wrapped up our delicious meal by splitting a piece of German chocolate cheesecake that was perfection. (We were a good team: I skimmed off the top and Grandmother ate the bottom with the crust.) 🙂 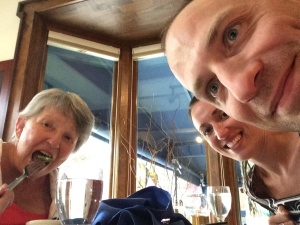 We had planned on watching the fireworks in Jackson, but we all decided we had enjoyed enough of Jackson and might be able to see fireworks from our hotel (if we could all stay awake long enough). We made the hour drive to our room in Alta, Wyoming. (We actually ended up driving through part of Idaho, giving me even more reason to wonder what I was thinking when I booked this hotel! :/)

The hotel is high up in the Teton mountain range, and affords us a great view of another angle of the Tetons. We’ve seen it from just about all sides now! I’m sure I chose the hotel based on the hotel description that said “views of Grand Teton.”

The downside is that it’s so far from Grand Teton National Park that Grandmother is not sure she wants to go tomorrow. 😦 There are views for miles around here and a scenic chairlift that takes passengers up for “the best view of the Tetons” (according to the desk clerk at the hotel), but I still feel bad that my miscalculation might prevent her from seeing the park. I made an error like this once before on a trip (right, Mom?), but that one turned out well. I’m not sure this one will turn out quite so well.

Car talk of the day:
On Grandmother’s first plane ride: She was 16 or 17, and she and her best friend went out to the airfield near where they lived. She said they took their pennies and paid for a short tour in a small plane because they were curious.

We decided to turn in early after watching nature’s fireworks provided by a beautiful end to the day (and because our hotel is in the middle of a national forest, which means no fireworks for a few miles).

Perhaps a good night’s sleep will reinvigorate all of us; I think we’re all dragging a bit here, almost halfway through the trip.

One thought on “On the Road: Embankments, Eats, and Errors”