The day started with a good breakfast, as promised, served with a smile by Tim Parker.

While enjoying our breakfast, Grandmother let us know that she thought she might enjoy the day best by relaxing in our spacious digs instead of heading into the steamy day unfolding outdoors. I hated for her to miss our only full day in Yosemite, particularly because I knew it was going to be great, so we compromised. I agreed to leave her for part of the day and she agreed to let us come get her for dinner and a small taste of the park in the cooler hours. 🙂

Tim and I knew we had a lot of ground to cover in a short amount of time, since the ETA we gave Grandmother was between 4 and 5. We got into the park just before 10, so that gave us around six hours to hit a park that might as well be five parks in one. We were already trying to budget our time when we stopped at our first overlook and view of Half Dome.

By sheer luck, a very friendly gentleman was in ear shot and heard us talking about our priorities. He came over and proceeded to give us a very succinct summary of what we should see and what we shouldn’t waste our time trying to see. Because of the drought, he told us that most of the waterfalls were basically dried up, and not really worth the time it would take to get to them to see them. That was a bummer, but good to know since we had limited time. He instructed us to visit four places, so we got in the car, circled those places on our map and started checking them off our list.

The valley in Yosemite seems almost untouched by the drought; there is still green grass and wildflowers that present a colorful contrast to the sheer granite cliffs of the various peaks and points found in Yosemite. Scenes that looked like paintings were around almost every curve (and there are plenty in Yosemite!), and I absolutely couldn’t get over the beauty I saw at each of our stops.

As the afternoon waned, we had to make some choices. Tim was looking forward to going to Mariposa Grove to see the sequoias, but the shuttle bus only ran every half an hour, the roundtrip to the grove was half an hour… all this added up to more time than we had. Our friendly guy from the Half Dome overlook had suggested that we check out Glacier Point (a location also recommended by our guidebook), so we decided we had to choose between the two. After reading more on Mariposa Grove, we thought it sounded pretty accessible for Grandmother and thought she might agree to make a stop there on our way out of town tomorrow. We weren’t sure how accessible Glacier Point was, so we decided to spend our remaining time driving to see the sights from the top.

Oh my goodness! What a wonderful choice! I’m sure that Mariposa Grove will be lovely when we see it tomorrow, but the scene at Glacier Point was so beautiful I could have cried. Tim and I agreed that we could have just stayed there all day and tried to drink in the beauty of our surroundings. We also agreed that this scene is probably in the top three most beautiful things we’ve seen on this trip.

Once we saw the accessibility of the place, we agreed that we HAD to take Grandmother there after dinner. Even though it was a two hour round-trip venture on curvy, crazy roads, we felt it would be absolutely worth it.

We drove back to the hotel, collected Grandmother, and headed back inside the park to the Mountain Room Restaurant (recommended by our trusty guidebook).

The restaurant does not accept reservations for small parties, and there was already a line formed outside when we arrived 15 minutes prior to the opening time. Fortunately, we were seated almost immediately with a beautiful view of redwoods outside. Typically there is an excellent view of the falls from the restaurant, but as mentioned before, the drought had robbed us of that. 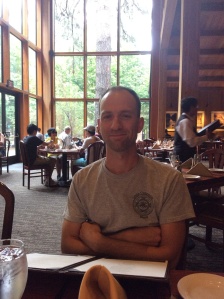 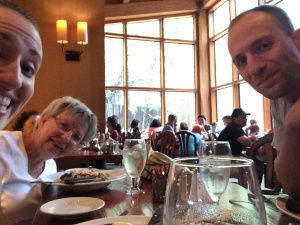 We decided that this dinner would be Grandmother’s early birthday dinner, and we treated her to creme brûlée and a happy birthday song at the end of a delicious meal.

After dinner, we began the long haul up to Glacier Point. We were hoping to see Half Dome illuminated by the setting sun, so we were literally in a race against time. I’m sure Grandmother was wondering if she was on Mr. Toad’s Wild Ride as Tim zipped around the curves in the road to try to get us to the top. Alas, once again, the sun had already set a bit too low for us to get the full golden effect, but the colors we saw instead were pretty amazing. On the way back down, Grandmother said that if she saw nothing else of the park, she would be satisfied after such a view. Her day was complete and had the best possible ending in her book.

Our plan is to get up tomorrow, pack up, and head to Mariposa Grove before we hit the road for our final destination before we fly out of LA and go our separate ways (at least temporarily). I really can’t believe we’re almost at the end!
L