We checked out of the hotel and went to Yosemite for a trip to Mariposa Grove this morning. Getting to Mariposa is kind of a pain during peak season–you have to park six miles from the location and take a shuttle bus up to the grove, and then, we discovered, you have to take another shuttle to the largest sequoias once you get to the top unless you want to hike. The guidebook misled us a bit, so we discovered on the shuttle bus ride up to the grove that it was an hour hike to the largest trees or another shuttle ride. I had Tim run off the bus to try to get tickets for the next shuttle, but when he got there he found out that they were sold out for the next hour and a half. Because we had miles to travel, we couldn’t wait around for the next availability. I was disappointed for Tim because he was looking forward to seeing the biggest tree in the park, thought to be the biggest sequoia in the world (30 feet across and over 2,700 [yes, over two thousand] years old). Tim decided it would just give him another reason to come back. There were a few sequoias next to the shuttle loading area, so we checked those out and then waited in line for the next shuttle back to the parking lot. 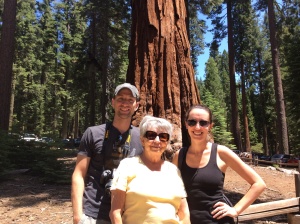 When the shuttle arrived, everyone crammed on, and by the time we got to the doors, we realized the bus was standing room only. I didn’t want Grandmother to have to stand on the bus, and Tim said we’d just wait for the next shuttle. Grandmother insisted that we go ahead and get on the bus, and the bus attendant said he felt sure someone would give up their seat for Grandmother.

I can’t even begin to tell you how irritated I was as we moved to the back of the bus. Not a single person stood up to offer Grandmother a seat. Tim and I had just given up our seats on the last shuttle to an elderly couple, and I was shocked that no one on this bus had the same courtesy. I even made eye contact with the girl who had been standing in front of us in line–she and her boyfriend had been laughing about Grandmother’s estimations of how we would get back and get to our car and go. I was just about boiling. I counted no fewer than six people under the age of thirty around Grandmother who just sat dumbly and ignored her as she stood the four miles back. Ugh. Grandmother was a good sport about it, but I hated every second of it. I said that, surely, if any Darby grandchildren had been on that bus, they would have had more courtesy! Grandmother said she thinks even Mike (“who’s not a spring chicken” haha!) would have given up his seat to a little old lady. I wondered if, by the time I’m old, kids would be content with strapping me to the top of the bus. 😛

When we got back to the car, we started in the direction of Encinitas and David Cheng. We had lots of good conversation and nearly completed the stack of cards with questions. Our five hour drive turned into six when we hit LA during rush hour… as John Denver says, “Livin’ (or in our case, drivin’) on an LA freeway ain’t my kind of havin’ fun”–especially because I, yet again, was in need of a bathroom break! I tried to convince Tim to take the Disneyland exit, because I was sure they had bathrooms there (and why not ride Pirates of the Caribbean while we were there after Jaclyn told us how great it was?)–but he just kept on driving! Rude! 😉

We stopped in Irvine for some dinner and booked a hotel in Oceanside. Once we were back on the road, it wasn’t long before I could make out the dark form of the ocean to the right of our car. We’ve reached the Pacific!

David Cheng is expecting Grandmother tomorrow around 11, and after Tim and I drop her off, we’re off to San Diego to see Tim’s brother, Lee. Tomorrow is Lee’s birthday, and as a birthday gift, Tim will be helping Lee move. 😉 After an afternoon of moving and visiting with Lee, we’ll head back to David’s to visit a bit there (I was such a tiny girl the last time I saw him!), and then we’ll be on our way to LA for our flights out the next morning.

One thought on “On The Road: Trees, Talks, and Traffic”