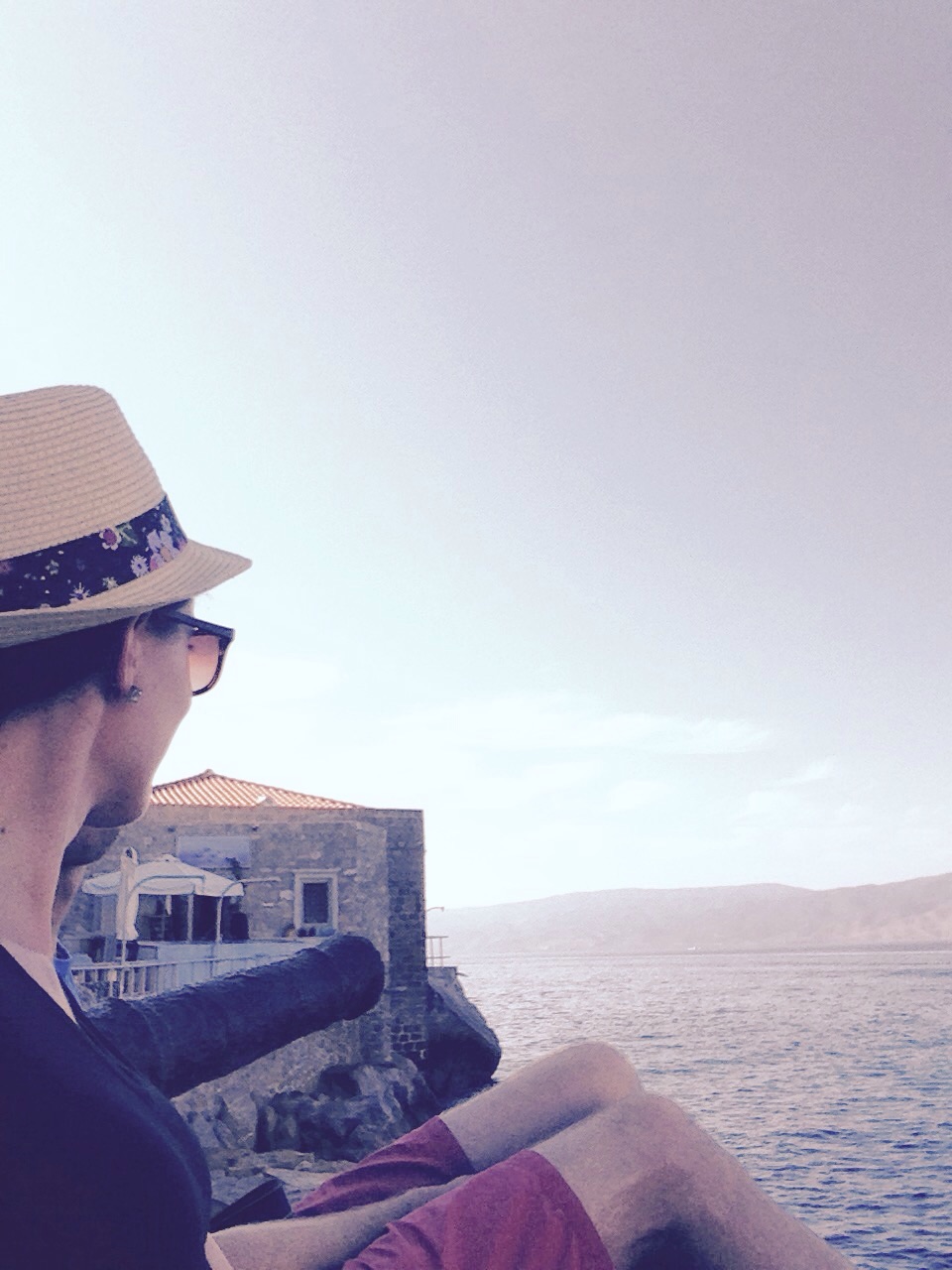 Another day, another adventure!

We were taken to Piraeus Port this morning to head to Hydra. The two-hour boat ride over was nice for some reading (and some sleeping on a certain husband’s shoulder). We pulled into the first port of call and got only a taste of what we would see in Hydra. Wow-oh-wow. We were awe struck by the bustling harbor and the maze of side streets that were like a picture anywhere we looked. 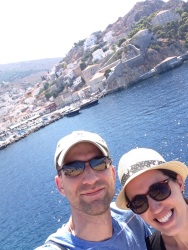 The town of Hydra

Must be sharks in there!

View from the fort, a la St. Maarten

Some of the luggage-carrying donkeys 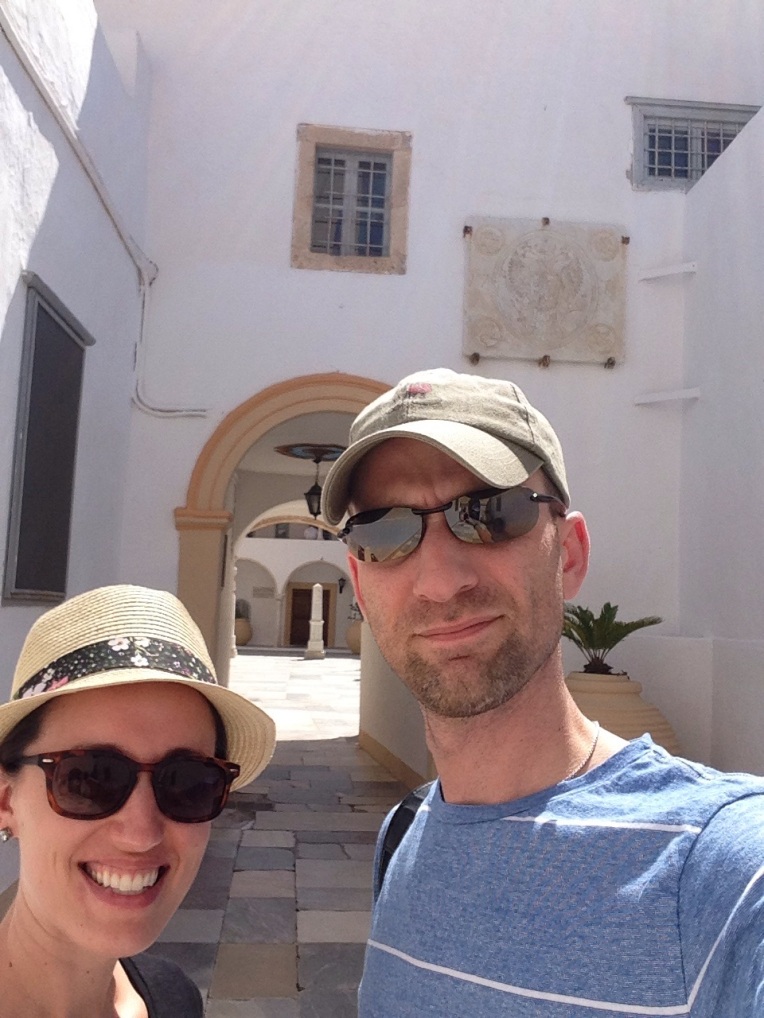 We took the brief hike up the hill toward our hotel, and were yet again wowed. We are staying in a restored ship captain’s home that was built in 1810. It is still owned by the same family, and until three years ago was still their private residence. We were originally booked to stay in the old wine cellar, but they moved us, and we are now staying in the bedroom used by the ship captain and his wife when the house was built. For people in love with old homes, this is a feast for our eyes! Everywhere we look brings new delights. We were also delighted by some sour cherries on our arrival. I thought they were more olives (wish I could ship all the olives I’ve turned down to you, Jaclyn!), but Tim said they were sweet and I should try them. Imagine the best Gushers fruit snack ever in the world, and you’ve got the treat they gave us as part of a traditional Greek welcome. 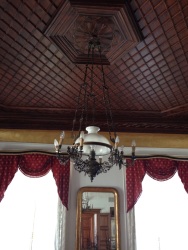 This room was a dream! Best reception! 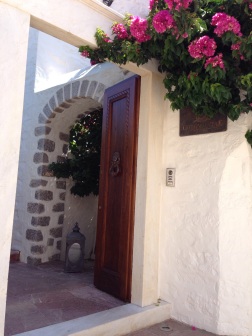 Entrance to the hotel 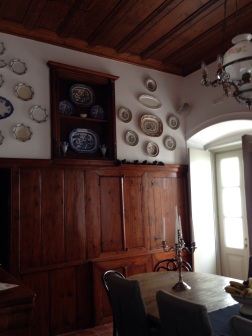 Love this kitchen space!
And speaking of delights… The village is definitely one. Quaint shops and restaurants line the harbor, and Tim and I enjoyed an afternoon exploring the area and getting a little lost in the labyrinthine streets that stretch out from the main harbor. We had one of the best lunches ever… I had to text Jaclyn to tell her about the melt-in-your-mouth lamb I had that was better than anything I’ve ever had and was less than $10! After lunch, we enjoyed more ice cream at The Cool Mule. The guy in the hotel really recommended it, even giving us the business card for the place. He definitely didn’t oversell it… Tim said it was the best ice cream he had ever eaten, and he even talked about going back for more later. For those of you who know Tim’s affinity (or lack thereof) for sweets, this is HIGH praise. 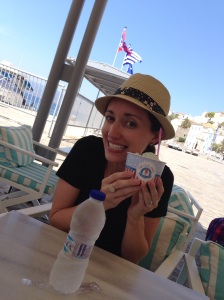 After much walking and calf stretching as we climbed up and down stairs in the alleys, Tim decided we deserved another treat, and we stopped at a little bar overlooking the ocean. Tim’s first margarita of the trip!

After more walking and window shopping, we headed back to clean up for dinner. Our dinner reservations were at a restaurant named as one with the best view in the world by ABC News. Considering this praise and billing, we were surprised to see the menu prices… They were about what we’ve paid for other dinners with lesser views. 🙂 We missed sunset by the time we got there, but the sky was still pink with an afterglow. The food was definitely worth every penny. Deliciouso! Our service was not so great, as we waited around 45 minutes for our bill… But as our waiter reminded us, we are on island time, and the weather was perfect, so why hurry back inside? 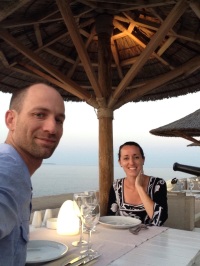 Tim was obsessed with the light on our table. He wants some for our house!

On the recommendation of the front desk, we are headed to Bisti beach tomorrow. Bisti is on the other side of the island in a remote location, so we will have to get there by ferry. We hadn’t actually planned a beach trip on Hydra, but we decided it sounded pretty perfect, and worth a “lost day” on the beach. Breakfast doesn’t even begin until 9, and the ferry doesn’t run until 11, so we will get to catch up on all the sleep we’ve lost the last few days (though we have been warned that dawn is noisy here, with roosters crowing, the donkeys braying, and the plethora of stray cats fighting). All in all, wahoo for Hydra!