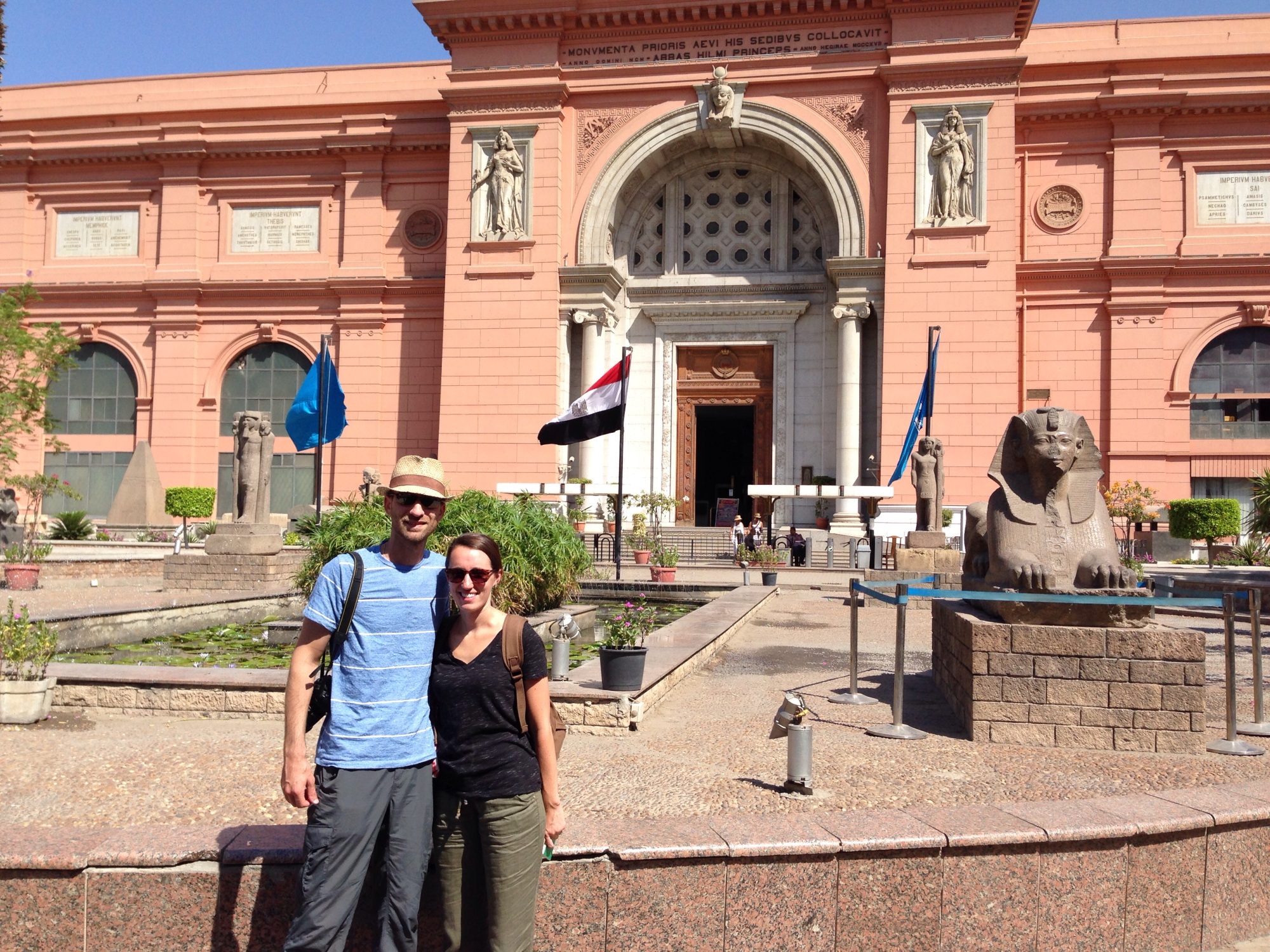 This morning saw us in the situation every traveler overseas dreads–experiencing some gastrointestinal distress thanks to who knows what. (Maybe we were struck with the curse of the mummy, Gordon!) My symptoms seemed to subside pretty quickly, but poor Tim was not so fortunate. Despite feeling not quite up to muster, he wanted to go forward with the day’s plans.
First, we visited The Citadel, a fortress built in the 1100s and used to fortify the city against invading Crusaders and other enemies of Egypt. The fortress was built on the highest point of Cairo, so we had a beautiful panoramic view of the entire city from this location. In addition to the fortress, Muhammad Ali, the founder of modern Egypt, also built a palace for his wife and a mosque for himself on this hill. Unfortunately, the palace was ransacked and partially burned by looters in the 1970s, and while work was begun to revive the building, our guide said that workers have been “lazy” in making repairs. As a result, much of the palace is exposed to the elements. We were not able to enter the palace, but we could see through burned out walls how magnificent the palace must have been. The mosque was built by a Turkish architect, and is actually an imitation of the Blue Mosque we visited in Istanbul. It was really lovely inside, with most of the original features from the construction in the 1800s still intact. Muhammad Ali’s mausoleum is actually inside this mosque, which is an unusual feature.


Tim alerted our guide and driver to his condition when we first got in the car, and they were both concerned and looking for solutions to help him feel better. When we got back to the car after touring the site, we discovered that our driver had gone to get Tim a Turkish coffee, which they had both agreed would do a lot for Tim’s condition. Tim actually did seem to revive a bit after drinking it, so we made our way to the Egyptian Museum.

We passed Tahrir Square, the site of the revolution, as it is very close to the museum. It’s a large space, and the emptiness and manicured look of it now belies the history of the place. Our guide, Ashram, told us that he took his boys (11 and 9 at the time) down to the square when it was happening so that they could experience history. He was so proud of what the people had achieved, and told us how much they love their current president. He has done so much, according to Ashram.

The museum does not allow any photography, and they are so determined to prevent it that they require that you check your cameras in before you enter. So, unfortunately, we only have a few photos of the exterior of the building, and none of the amazing collection inside. 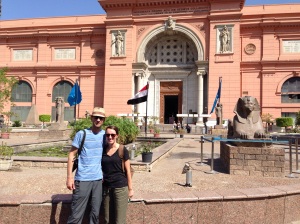 Ashram said that it would take two full days to see every object in the museum, and we only had two hours planned. He brought us to see the highlights, including the collection of Tutankhamun’s tomb and some of the impressive monuments and statues that were in great shape for being over 3,000 years old.
And speaking of over 3,000 years old… the mummies! What a fascinating thing to see. Standing next to the cases that contained their bodies, I kept reminding myself just how old these bodies really were. The fine details that have been preserved were amazing: the tufts of hair, the manicured nails–all of it preserved for an afterlife the kings all expected to see, and for which they would need these bodies.
By the end of our time in the museum, I could really see that Tim was fading. By the time we arrived at the restaurant, it was no good. He ate one bite of bread and was sick. Poor guy!
The schedule had us going to the Egyptian market after lunch, but with Tim feeling as poorly as he was, we opted out and went directly back to the hotel. Fortunately Tim got a prescription for phenergan before we came, so he was able to take some as soon as we got back to the hotel. We both climbed into bed and settled in for a long nap. After three hours of napping, Tim was feeling better and had a little appetite. He ordered some soup, and it seems to have agreed with him okay.
So, not exactly as we anticipated spending our last full day in Cairo, but these things happen, especially when traveling in places like this. We’re hoping that both of us will wake up right as rain tomorrow for our six-hour roundtrip adventure to Alexandria tomorrow (though I realize now we probably should have planned a day in the Valley of the Kings instead… that was an oversight on my part!). If we’re not in top shape tomorrow, we may be spending our day back in Cairo instead. We’ll see what tomorrow brings!

3 thoughts on “Visits with a Different Kind of Throne…”