This weekend, one of Tim’s best friends from his Marine Corps days came to town. We’ve come to look forward to these annual visits when work brings him to town for the Brickyard 400. Wally works for Ford Performance in IT for their NASCAR circuit. He’s come for a few years now and stayed with us each time. It’s such a treat to see him, and this year we got to see him just a smidge more–it was something of a “take your friend to work” day when he secured passes for us to join him a bit behind the scenes.

Though we’ve lived in the area for seven years now, we’ve never been to Speedway and never even driven past the Indianapolis Motor Speedway, much less gone inside. This was the perfect excuse to visit the “world’s greatest race track.” When else would we get to have such an experience?
The track was built for Indy cars, but NASCAR has taken over the track for a weekend event for the past several years. Anyone who knows us could guess that we know very little about NASCAR. If a gun was held to my head, I could probably come up with three or four NASCAR driver names (Jeff Gordon! Dale Earnhardt! Dale Earnhardt, Jr! Tony Stewart! Spare my life!!!!), but not much past that. So, as we signed into the NASCAR trailer for our hot passes, I felt a bit guilty about how, in some ways, these passes were a bit wasted on us. I’m sure there are so many people who would have been dying to have the experience. They would be drooling over their favorite driver’s car in pit row or standing in line for an autograph, taking everything in from a fan’s perspective. I just saw a lot of cars and drivers in jumpsuits (who I thought of more for how hot they had to be than anything else!). BUT, even as a NASCAR ignoramus, I can tell you I was impressed by the scale of the operation and the power of the cars. While I didn’t come away with autographs or photos that made me swoon, I came away with a great experience.

Wally treated us like VIPs: He picked us up in a golf cart at the main gate and zoomed us over to the Ford Performance trailer. He gave us a tour of their space, and we got to chat with some of the team support and the team photographers. It was really interesting to see all the analytics that go into racing. It’s a very technical sport! 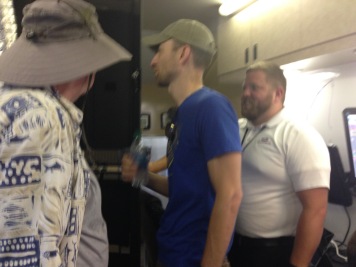 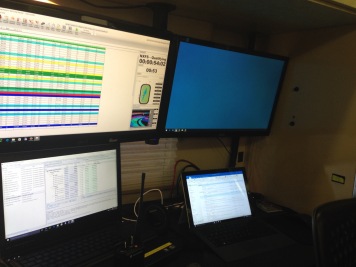 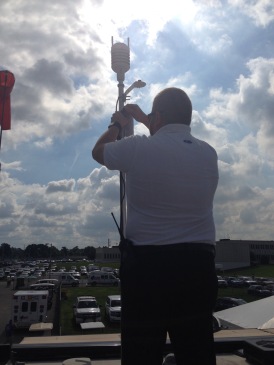 After a tour of the trailer, Wally took us over to the garages and pit row. He schooled us on some of the intricacies of getting a car course-ready, and the efforts that teams make to improve performance on the vehicles. 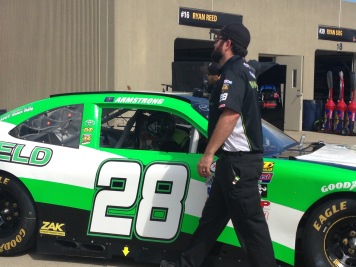 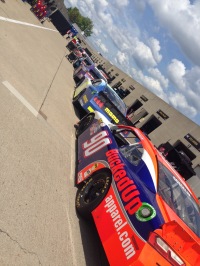 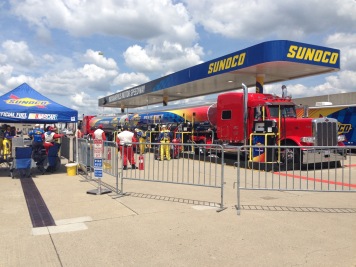 At pit row, we got to watch teams roll some of the cars out in preparation for the qualification races that were set for the early morning and afternoon ahead of an evening race. 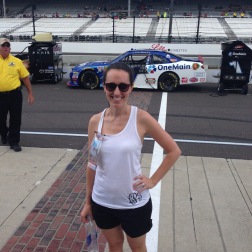 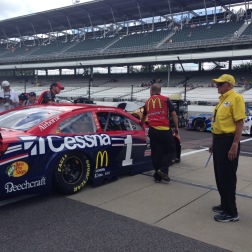 Wally had to head back to work, so we went up into the stands to watch some of the first qualification round. In this first round, a single car went around the track a few times, hoping to qualify for the next round. We agreed that we can’t fathom how loud the track was when there was more than one vehicle going around–one car made so much noise as it blasted past us. I had noticed quite a few people with headphones and ear plugs, and after the first few cards went past, I understood. 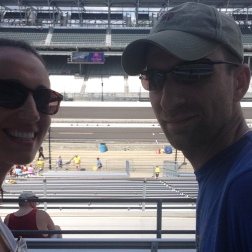 And the speed! Holy moly! Those cars go so incredibly fast. We saw one car almost beat the track record going 185 miles per hour over the bricks. I can’t believe that, outside of races, these drivers only prepare using simulators! The only time they are actually behind the wheel of their cars is when they are racing in a NASCAR race. I can’t imagine the type of technology it would take to prepare me to drive a car that fast and take turns like they do without actually being behind the wheel. I feel like I would be dead in no time flat.

After the first qualification round, we grabbed some lunch and cooled off in some of the merchandise shops. The temperature was close to 100, and we were melting a bit. I can’t imagine the crews in their long suits. Whew! We hoped there was some kind of cooling mechanism in them–otherwise the heat would be unbearable.

After wandering around the infield, we ventured to the other side of the track to watch the second round of qualifications. This time, there were multiple cars on the track trying to get one of the top spots to be able to race in the evening. As the number 14 and number 88 cars sped by, the crowd cheered. Tim knew that Jeff Gordon was in the number 88 car–way more than I knew. It was a big deal for the crowd because Mr. Gordon retired last year, and had actually come out of retirement to race for an injured Dale Earnhardt, Jr. And, it turned out that Tony Stewart was in number 14–and he is set to retire after this season. Wally said that, like me, many people associate the sport with these big names, and we wondered who might step into the spotlight to become the big names for NASCAR when they leave. Whoever it may be, they have big shoes to fill. In the short time we were there, I saw how passionate the fans were about “their” drivers. People cheered for their favorites and booed for their rivals–a fact that had to be lost on the drivers themselves in the moment, since the sounds of the engines were so loud at points I could barely hear the sound–and I wasn’t sitting directly behind the engine of a car. 🙂

Our first NASCAR experience–hot in more ways than one–was an overall positive one. I’m not sure you’ll catch us watching it on TV or sporting #88 gear, but I gained a new appreciation for the sport after our day there. And what a way to see the Indianapolis Motor Speedway for the first time! Many thanks to our well-connected friend for giving us a once-in-a-lifetime experience.