Life has taken us on some unexpected adventures in August and September, so heading back out on a planned/unplanned adventure over the weekend was a welcome change!
My dearest friend from college, HJE, and I have made an effort to get together at least twice, but preferably three, times a year since we graduated (gasp) TEN years ago. (I’m still thinking the math is wrong on that one…) Her family has grown to include a husband (who could be Tim’s long-lost triplet) and two adorable girls. We look forward to our visits and alternate locations, her home in northern Ohio and ours. This visit, we had intended on heading to northern Ohio and on to Pelee Island (the southern-most point of Canada resting beautifully in Lake Erie). However, white caps on the lake meant choppy water for the boat, and our trip was postponed. To HJE’s oldest daughter’s delight, a trip to Cedar Point was proposed instead. It would be a first trip for her, her baby sister, and me. 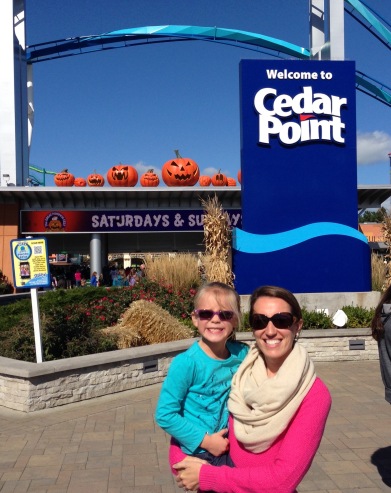 A quick trip down Ohio 4 on a sunny Sunday brought us to the front gates of “America’s roller coast” and the second-oldest operating amusement park in the country. (It originally opened in 1870!) Cedar Point received the Golden Ticket Award for “Best Amusement Park in the World” from Amusement Today for 16 consecutive years. It’s also the only amusement park in the world with five roller coasters taller than 200 feet. For an adrenaline junkie like Tim, this had all the makings for a Best.Day.Ever award.
Cedar Point is open from early May to Labor Day, and then only on the weekends until the end of October or early November for Halloweekends. Tickets can be pretty pricey for a Midwestern venue, especially if you spring for the Fast Lane passes. You can buy tickets in advance for some savings, and Tim got a pretty decent veteran’s discount which he could use on up to six tickets, so we all got in for $45 each (kids under two are free).
There is definitely a historic charm to the main midway of the park. The original carousel still turns, and Pink’s offers up their famous hot dogs.

The park was decorated for Halloween, with pumpkins galore and some fun Cedar Point-specific decor. 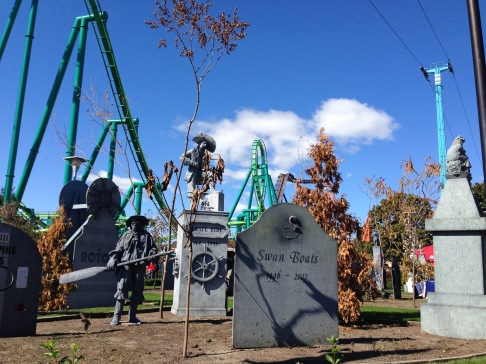 A reminder of all the dearly departed rides.

Tim and HJE took off to ride the newest roller coaster, Valraven, while I went with the rest of the family to Kiddie Kingdom.
Having only experience with Disney World in recent years, I have to admit I was absolutely delighted at how short the lines were for the kiddie rides. No wait was more than ten minutes, despite the fact that the park was pretty crowded. 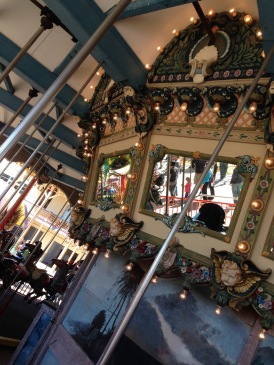 The lines were all for the real attractions, the coasters. HJE and Tim stood in line for two and a half hours to ride Valraven, and the reviews were mixed whether it was worth the wait or not. After Valraven, they hit Top Thrill Dragster (which made my palms sweat just looking at it!). Tim said he felt like Superman as he was launched down the straightaway. The ride promises 100+ miles per hour within 3.2 seconds, and it delivers. It thunders around the track in thirty seconds, leaving riders thrilled and breathless. This coaster and Millenium Force were Tim’s favorites of the day. 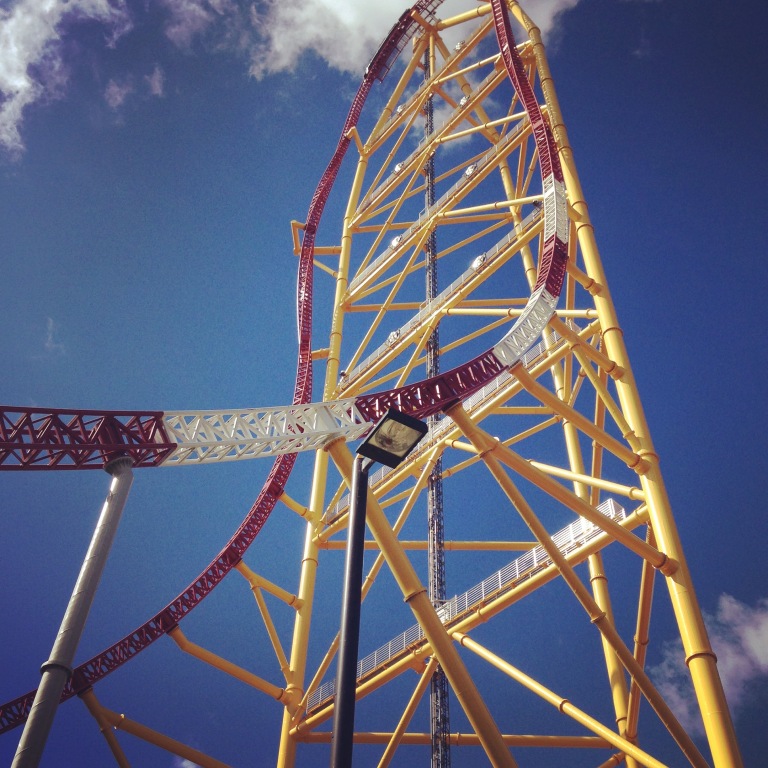 Food at the park, as with all parks, was expensive, but actually pretty good. I got an Asian Chicken Salad (minus the breaded chicken) for lunch at Frontier Inn and was pleasantly surprised at how fresh the greens were. Dinner at Chickie’s and Pete’s was not quite as tasty, but was served quickly, which matters when you’re just sitting down to eat dinner at 8 p.m. on a school night!
The park was open two extra hours the day we were there, and as the sun set, the fog machines turned on full blast, and zombies and scary clowns started roaming the park. If you wanted to be left alone by the ghoulies and goblins, the park was happy to sell you a “No Boo” glowing necklace for $10(!) that let them know you weren’t in the mood for any frights. There were several haunted experiences you could enter (Blood on the Bayou and a slaughterhouse-themed encounter, for example). Having been at Universal Studios for Halloween Horror Nights, there wasn’t really a comparison as far as scare-factor level, but Cedar Point still made a showing.
For roller coaster junkies, Cedar Point is definitely a box worth checking on the bucket list. And for parents with small children who don’t like standing in long lines, Cedar Point is a great place to visit (at least if our experience was any indication). For adults who aren’t really into thrill rides (or sweat just thinking about them), Cedar Point doesn’t have as much to offer. I enjoyed walking around and appreciated the historic nature of the park, but had I not been busy riding kiddie rides with a five-year-old, I might have found myself bored within the first few hours. 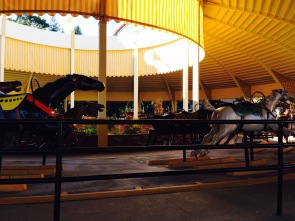 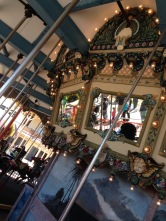 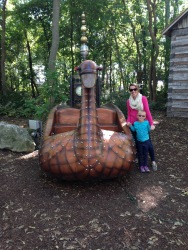 But, all-in-all, everyone had a great day, and I’m glad we went. I might be compelled to go again if I have another five (or six)-year-old companion to ride the scrambler with me over and over again. 🙂