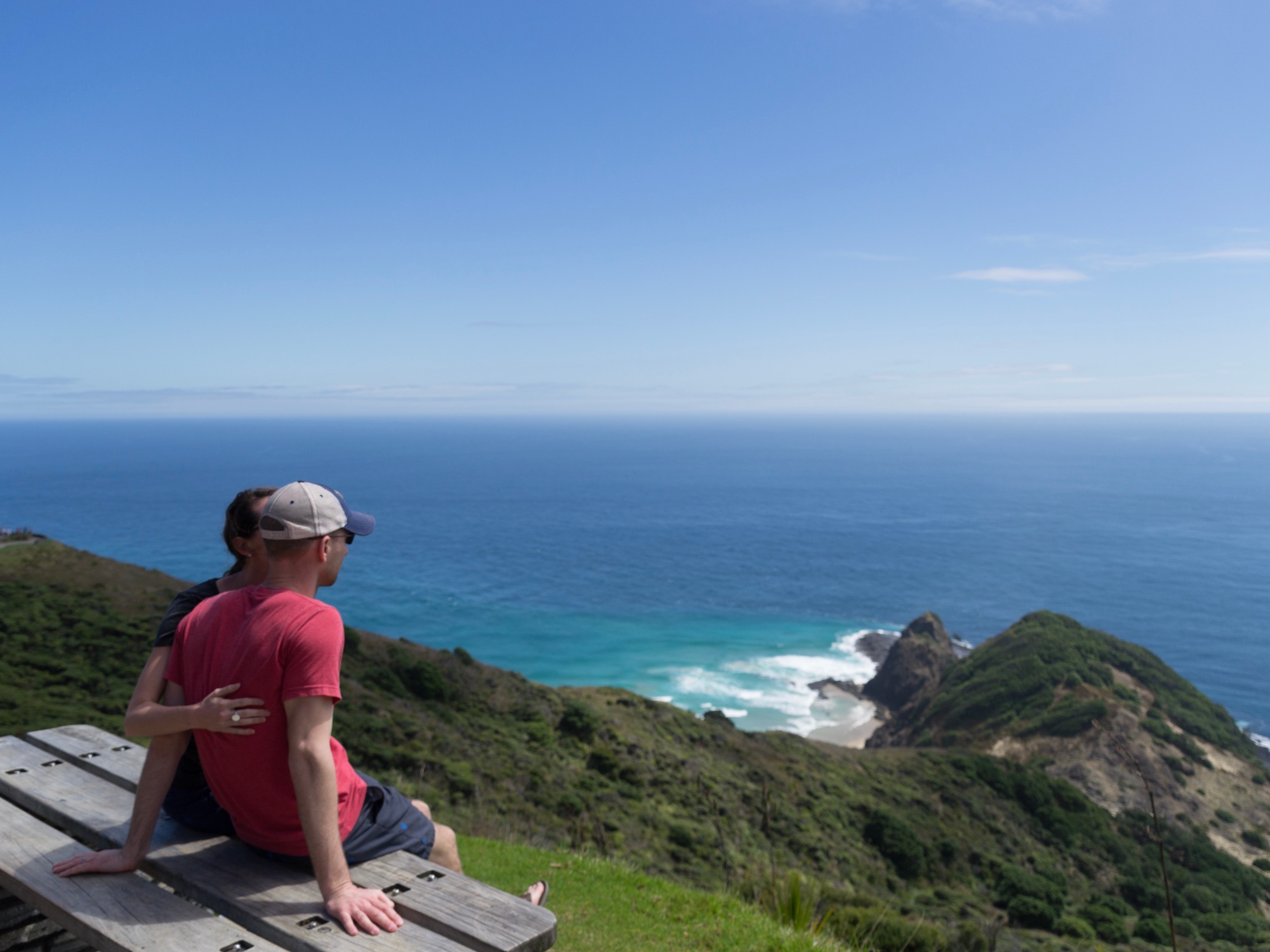 Another beautiful day on the north island! We had an early pick-up for a tour to Cape Reinga. By the end of the day, we would travel all the way to the northernmost tip of New Zealand where the Pacific and Tasman seas meet.

Our first stop was 90-mile Beach. What an amazingly beautiful place! Vehicles (including our mammoth tour bus) roar down the shore at fast speeds, driving the beach as though it’s a highway. The surf is too rough for swimming along this stretch, so the main draw is the novelty of driving on the sand as close to the surf as possible without getting stuck. I think I could contently spend an entire day on this beach. Since I’m not much for swimming in the freezing ocean waters anyway, this beach would be perfect for me. No people for miles around, and surprisingly, not many vehicles either. The isolation and beauty of this beach make it my idea of a perfect spot for some reading, sunbathing, and a picnic.

After driving along the water’s edge, we were back on the main highway headed to Cape Reinga. Reinga means underworld in Maouri, and this spot is where they believe their souls begin their travels to a mythical island for eternity. If this is the place where the journey begins, I can’t imagine what the final destination must look like. Absolutely beautiful. An hour spent here was well spent. We paused so often and tried to commit each break, each outcropping to memory. This is a place to call to mind in moments that require peace. 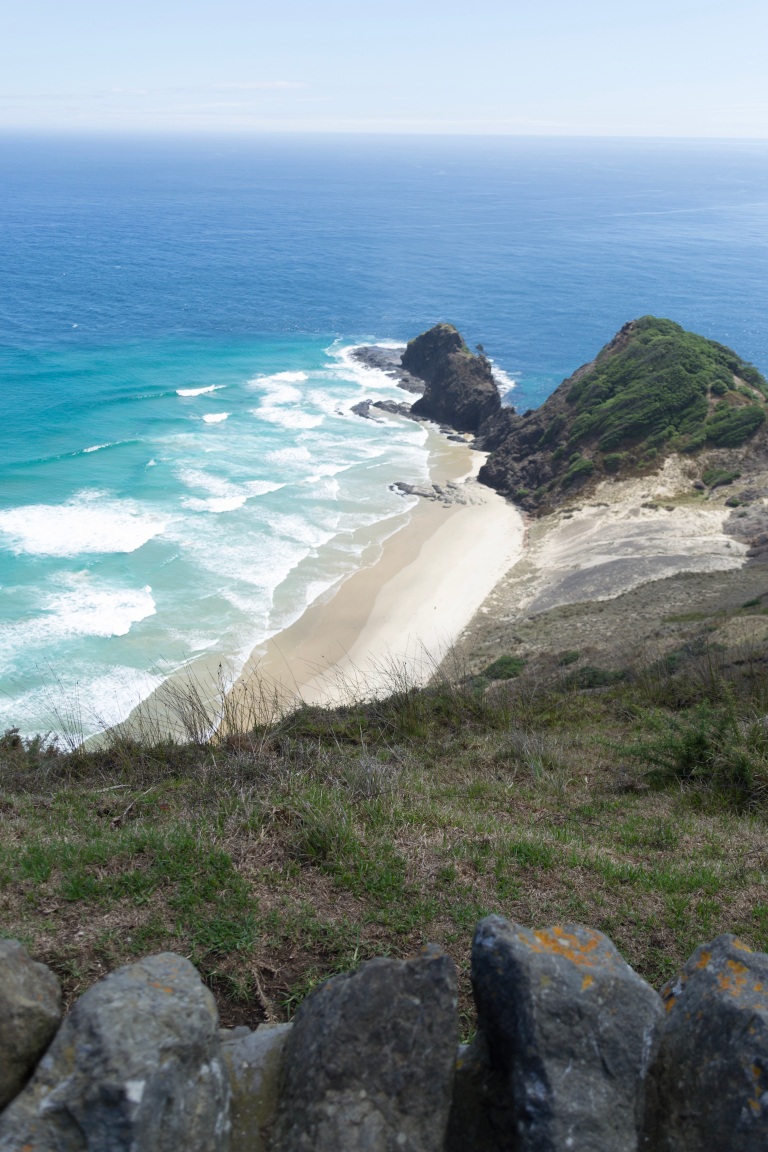 We went from peace to action in the form of sand sledding. The giant sand dunes close to Cape Reinga provide slopes perfect for a little adrenaline boost. The only challenge to your adrenaline spike is how high you can/want to hike the dunes. It’s definitely much easier going down than going up! I either followed Tim’s footsteps or tried to get a running start–shifting sand does not provide a firm foundation for climbing! The reward was worth the challenge, though. It was like being a kid again going down the slopes! 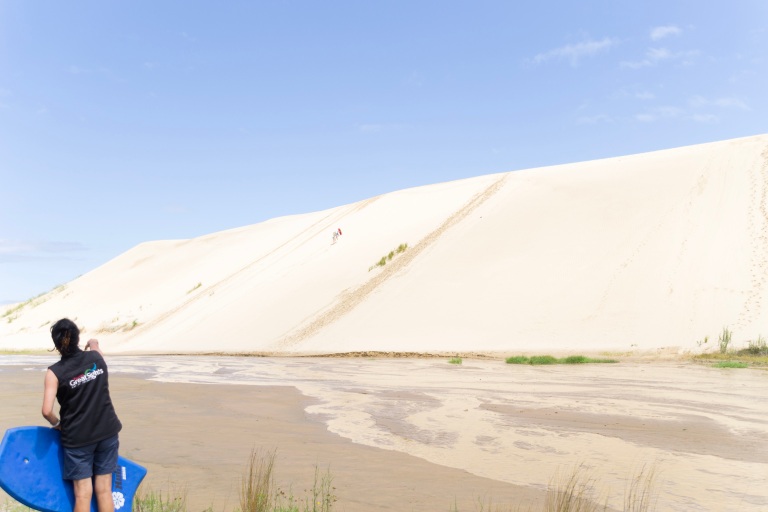 One thing about a Cape Reinga tour: there is a lot of riding in the bus. We spent more time in the bus than at any of the stops, but it was a great way to see some of the beautiful northern countryside and learn more about New Zealand and the Maouri culture as our guide shared stories and tidbits along the way. And after so much travel and adjustment to the time difference, it was nice to have a chance for a few cat naps along the way.

After a late lunch at a little bay in Houhora, we were on our way back toward Paihia. More cat naps commenced.

We had one final stop at the Puketi Kauri (pronounced co-dee) Forest. The kauri trees are protected after being harvested for years for their wood and gum. It takes these trees 800 years to mature, so they are difficult to replace. They are pretty massive, but Tim was quick to point out that he thought the redwoods were larger and more impressive. These trees were still beautiful to see, and the cool, fragrant air was a pleasure after a long day. 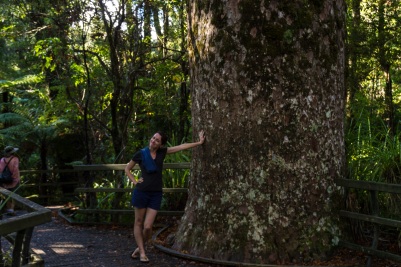 Back in Paihia, we had an amazing dinner at the wharf at Charlotte’s (named for the first female inhabitant of New Zealand who was a convict and all-around bad mamajama) and enjoyed the sunset on our final night in Paihia. 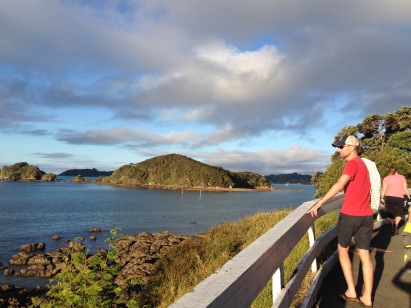 Walking to the warf 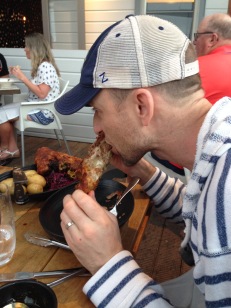 Tim and his giant pork knuckle

It’s back to Auckland tomorrow for a couple days before we move on to Rotorua!

One thought on “A Day to the Cape”