There are plenty of options to get to and from Machu Picchu, ranging from long bus rides all the way up to the $500+ ticket aboard the Hiram Bingham train (dubbed “the freaking Orient Express” by one lucky passenger we met). Our big splurge was on the Belmond, so we went with something a little more affordable for our transport.

We caught the PeruRail Vistadome train in Ollantaytambo for the trip to Machu Picchu Pueblo. Our guide expertly maneuvered us through the stalls to the train with just enough time for a bathroom stop before the one and a half hour train journey.

On the train, we were seated with our guide on the left side of the train (the best side for viewing the scenery, by the way!) at a table with four seats. Once the train departed, we were offered complimentary tea and a snack. (After they tried to give me a really yummy-looking brownie, which I had to decline, our guide informed them of my dietary restriction and they brought me something I could eat.) Speakers in the train car would occasionally play interesting facts and about the scenery and area in Spanish and English.

The views from the panoramic windows were beautiful, and the time passed quickly.

On our return journey, we waited at the train station in the Belmond Lounge before boarding the train back to Ollantaytambo. As before, we enjoyed seats on the left side of the train car, as well as tea and a snack. However, the return journey was a little more lively than the inbound one. A masked dancer performed up and down the aisle, pulling Tim, myself, and several others up to dance. After the dancing came a fashion show of alpaca wool clothes put on by the train car staff. It was lively and fun. 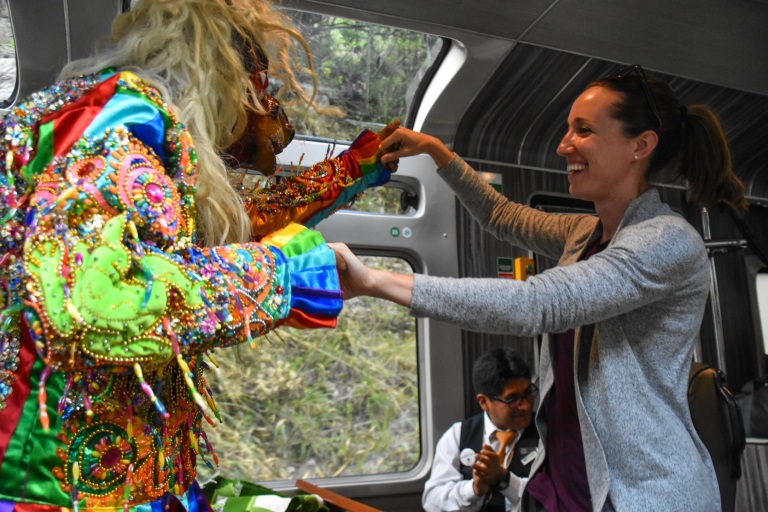 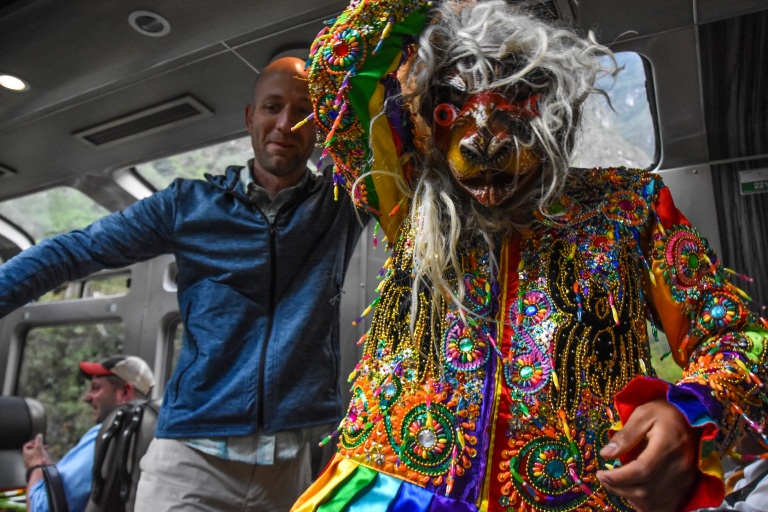 I’ve read mixed reviews of the train online, but overall, we thought the Vistadome was a nice way to get to and from Machu Picchu. 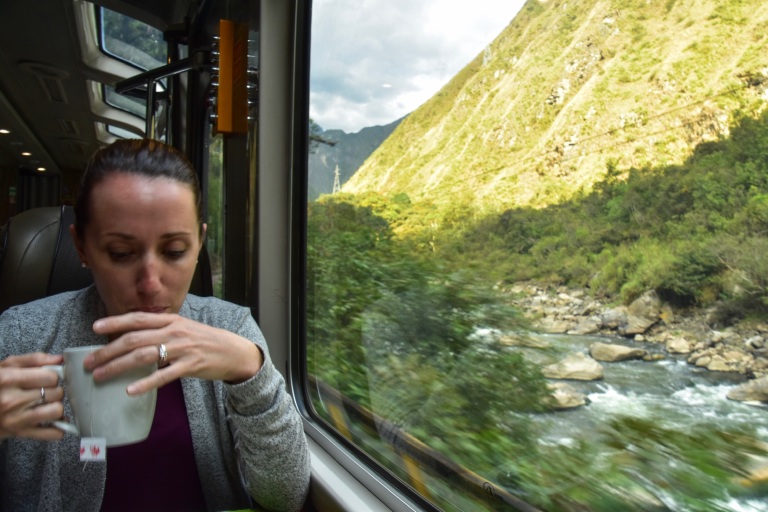 A pro tip we learned from our guide on the inbound trip to Machu Picchu: The train typically has two cars, and the tickets are all assigned to the A car first, with the B car being treated as overflow. On the first ride, A car was packed, while B car had 30 empty seats. Our guide asked if we could be seated in B, and we were immediately accommodated. On the return journey, our tickets were again for the A car, which had a long line for boarding. I went to the porter next to B car and asked if we could switch. He let us switch without hesitation. Both journeys were more quiet and less crowded, and all we had to do was ask.

To learn more about the Vistadome train, times, and get tickets, visit their website: https://www.perurail.com/trains/vistadome/